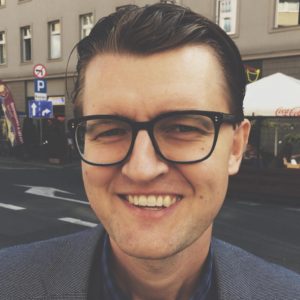 The journey that led me to make „It’s Okay to Panic”, a nostalgic documentary film about climate emergency in Poland, was unusual to say the least. I grew up in Chicago with no Polish roots, never went to film school, and had little interest in environmental issues until the past few years. On paper, I am an unlikely person to be making such a film.

For me, low-budget documentary filmmaking has always been a kind of personal way of doing two things – expressing my anxieties and addressing my curiosities. I don’t do it for money or fame, or else I would have quit a long time ago. My first two documentaries were about being a foreigner in Poland – the feeling of being an outsider in a place far from home, with all the uncertainties and wonderful surprises that come with that lifestyle choice. My third film – „Smog Wars” – was made because I had become a father during a disastrous smog season in Poland, during which time I realised that no one in the country had ever made a film about this subject which has a huge impact on our daily lives. The film was my own strange form of activism.

The idea for „It’s Okay to Panic” came to me in December 2018, when I saw Professor Szymon Malinowski speaking in a television interview about future climate catastrophe and the potential for the end of human civilisation. It was a rather standard TV reportage full of stock footage of melting glaciers, wildfires, and ruined landscapes. Professor Malinowski spoke with a great passion for the subject, but I couldn’t help feeling that his message would connect with more people if we would know more about who he is as a human being. For example, where did he grow up and what were the events that shaped his worldview as a Polish citizen? How does he feel when he goes home at night after a day of scientific work involving impending human catastrophe? How does he process the subject of climate change on an emotional level, and how does it affect his relationships with the people in his life and the society around him? When he sees that Poland is increasing its annual carbon emissions at a rate faster than other countries, how does that make him feel in light of what he knows about the subject?

The more I thought about these questions, the more I realised that such a film had never been attempted. When people think about films about climate change, there are a few names that come up regularly – Al Gore, Leonardo DiCaprio, David Attenborough, and others. They are all known figures who have great passion for the subject of climate, but they are also professional people who are used to standing in front of cameras, delivering prepared lines. I believe that unfortunately in today’s cynical world of “fake news” their work is often wrongly dismissed as propaganda.

At the time I had the idea for this film, I didn’t know anything about Professor Malinowski’s life, and I wasn’t sure if he would be interested in answering my highly personal questions. I wasn’t even sure if he spoke English well enough to speak with me (my Polish is not very great even after 10 years in Poland!). But curiosity led me to write him an email asking to meet and discuss the idea of making a documentary portrait about “the inner life of a Polish climate scientist.”

He agreed to meet me. But then on the day we were scheduled to meet I received a text message from him saying that his father had just passed away and could not meet. So I began searching for other scientists who might be suitable for the film. But this search was not successful, so a month later I finally met Professor Malinowski and we began a long series of many informal coffee meetings, exchanging ideas about how such a film might evolve.

Ultimately what came out is a film about the recent past, present, and future of Poland from the perspective of a highly-respected climate scientist. We decided to use his father’s death as a reason for looking backward and paying respect to the past, appreciating how much the world (and the climate) has already changed within his lifetime. Simultaneously we wanted to focus on his life in the present – how he tries to warn people that we must change our way of living, how he views Polish society in the present moment, and all the reasons why he is so deeply worried for the country’s future.

Despite having no experience with documentary filming, Professor Malinowski proved to be a true professional with great patience for me and my crew. Having spent a lot of time together, I can say that his commitment to the subject of climate education is utterly inspiring and I can only hope that a small fraction of his passion is visible onscreen. This has been my favourite filmmaking experience so far, and I am sad that it had to end but hopeful that the film will inspire a new generation of climate advocates in Poland and around the world.

Co-Writer, Director and Producer of „It’s Okay to Panic”